One of the concerns of the European Union is the health of olive groves, which are found especially in southern Europe. For this reason, the CONSOLE project to assess its environmental affections has developed case studies.

Invasions of specific species from other places on the planet is, without a doubt, one of the greatest environmental problems, since the invasive specifications displace the endemic ones.

For instance, there are many problems facing European olive growers, to which we must add a plant disease transmitted by sap-sucking insects that has devastated olive and fruit orchards throughout southern Europe.

Since the summer of 2013, Xyella fastidiosa was detected in Olea europaea (olive) of the Puglia region (Italy ) noticed that the leaves of several of their trees were turning brown and their shoots were wilting. The problem spreads from one orchard to another as more olive growers discovered that their trees were drying up and beginning to die.  Currently it is present in Italy, France, Spain, and Portugal. 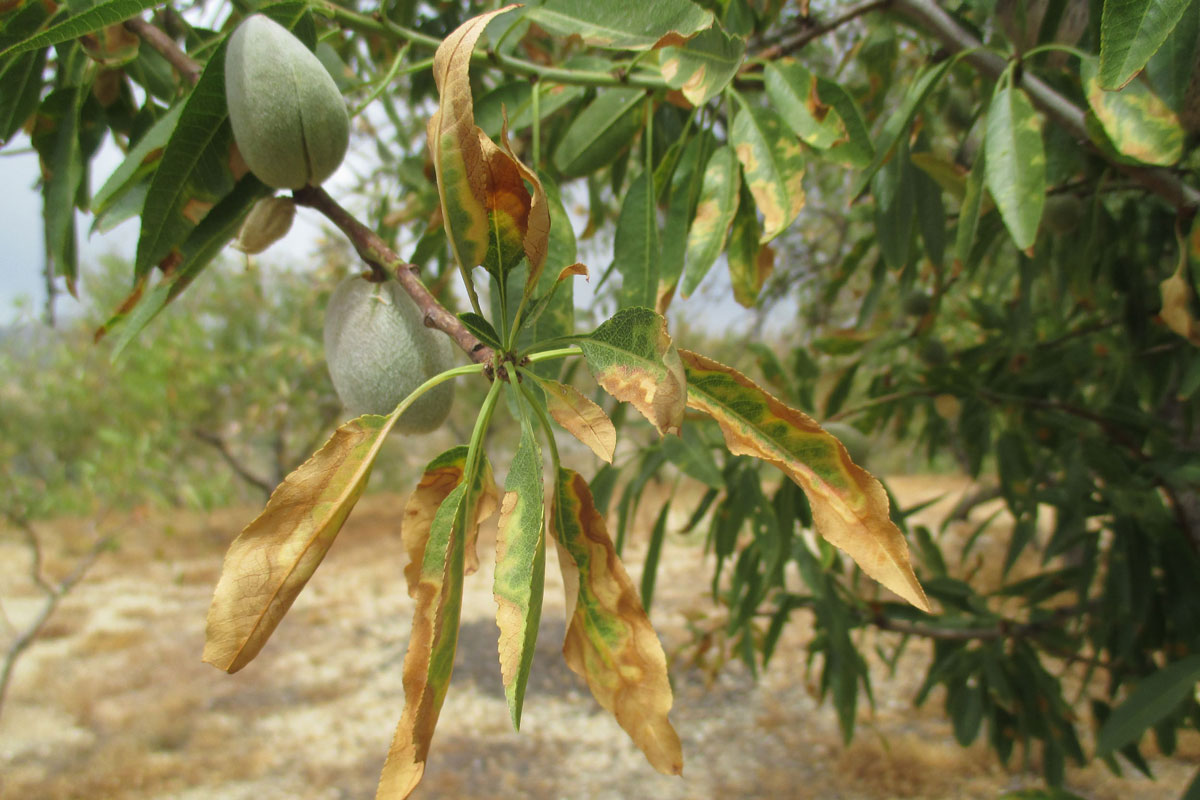 Xylella fastidiosa bacteria cause disease in almond and other plant species. / Photo: IVIA

Tree eradication brings with its considerable economic losses in the agricultural sector and has a very negative impact on the environment, since it increases the risk of erosion and soil degradation. Therefore, to the damages caused by Xylella fastidiosa we must add those caused by this measure.

It is a bacterium that is transmitted mainly by sap-sucking insects, such as bedbugs. As insects feed, the bacteria can infect the vessels that carry water and nutrients around the plant, known as a xylem. As the bacteria destroy the xylem, it slowly strangles the plant.

Not only olive trees are affected

But the disease can infect a wide range of plants, including shrubs such as the myrtle leaf and rosemary, oak trees, and major crops such as lavender. But also, food crops, such as cherry, plum and – of course – olive trees.

The science is the solution.

On the other hand, Schneider et al (2020) recently developed a spatially explicit bioeconomic model to calculate the potential future economic impact of the pest. The uncertainty about the spread is explained by simulating different scenarios. Most of the orchards were found to be within climatically suitable territory. Also with a slow spread of the disease and the ability to replace with resistant crops, projections of future economic impact on the affected countries amount to billions of euros. The researchers findings highlight the importance of minimizing the spread of the disease and implementing adaptation measures in the affected areas.